It's been a while since I wrote something here in The "Unwanted" Box! The past year was really crazy with lots of goings-on and stuff that kept me awake late nights. 😴 I owe you not only a big, crazy recap for 2020, but also upcoming news for the first half of 2021 (check out part 2 soon)! Join me for today's grumpy ride! 🚲🛴

Since releasing the debut single Airplane Wings in July 2020, I initially reported on a Grumpy Kitty Boy' feature with Tinnitist. It didn't stop there—we got features and interviews from other media outlets too! Check the list below:

Even as we're getting coverage from media outlets, visual artist Yuna Kim and I worked behind the scenes for months to produce Grumpy Kitty Boy's first animated music video ever! After creating the first storyboards, Yuna worked tirelessly for three (3) months to get all pencil sketch animations done on time for the scheduled music video release. On my part, I received a radio advertising grant from The Scope at Ryerson (CJRU 1280 AM) under the "ReStart Initiative" of the NCRA/ANREC for the upcoming music video release. I also started a GoFundMe campaign to tap on the generosity of fellow grumpies like you and cover additional production costs for the video project.

Yuna and I finally unveiled the Airplane Wings animated music video on YouTube last November 13, 2020! (It was a Friday the 13th, so yeah I dared defying the odds! 😼).

The fun part of the release was that I also did a Facebook live stream named "Fly Fly Grumpy" to kick off the YouTube premiere and celebrate the occasion. Along with Grumpy Kitty Boy original songs, I also performed a couple of covers including "Brooklyn" (The Midnight) and "Heaven Knows" (Rick Price) with my usual grumpy keyboard. I loved the turnout of that online event! 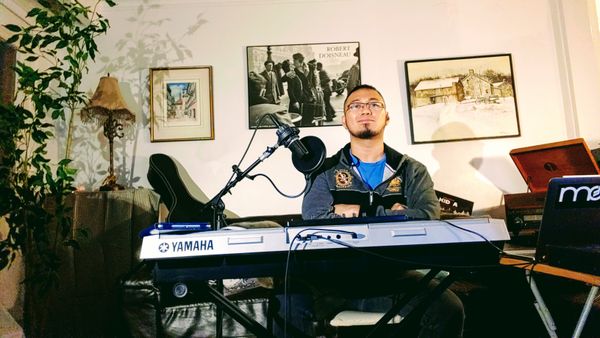 We got additional coverage for the music video release, including being part of "Zach's Picks of the Week" of Canadian Beat's "Weekly Beatdown" (Episode 93)! Watch the full episode HERE.

The animated music video also got live stream and radio play on November 19th in the radio program "Musikahan, Kantahan, at Kwentuhan" of DXCP Radyo Totoo (585 AM), based in General Santos City, Philippines. Shoutout to Ma. Eden Bringier and Marie-Luise Calvero for programming Airplane Wings!

Whew! That was a long bumpy ride, but we finally made it to the year 2021! The global pandemic of 2020 has been difficult for all of us, and yet there are also silver linings especially when we were forced to figure out how to run our daily lives within the confines of our living spaces. The year 2020 has been very productive for Grumpy Kitty Boy, and I look forward to what 2021 is bringing us this time!

If you still haven't checked out my debut single Airplane Wings, now's the time to do so! Buy a copy of the track to support the grumpy.

Watch out for Part 2 of this big update! Keep staying grumpy, and a Happy (grumpy) New Year to y'all! 😾